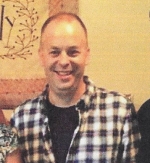 ATTLEBORO – Michael R. Ferreira, 46, of Attleboro passed away on Thursday, December 28, 2017 at Rhode Island Hospital in Providence after complications from an unexpected stroke.  He was the loving husband of Lynn (Schromm) Ferreira for the past 22 years.

Born November 24, 1971 in Attleboro, he was the son of Carol (Seguin) Hathaway of Cumberland, RI.

Mike was a lifelong resident of Attleboro and a 1989 graduate of Attleboro High School.  He then went on to receive a BA in business from Framingham State University.

He worked at various banks throughout his career including many years at Option One Mortgage. In addition he also worked at Santander, Citizens and Rockland Trust Company.  He was currently the underwriting analytics manager at Customers Bank.

Mike was a devoted father to his two sons.  He coached Attleboro youth soccer for over ten years and enjoyed the outdoors, hiking, Lord of the Rings, WWII History, rock and heavy metal music and New England Sports.  He enjoyed competing in road races and mud runs.

In addition to his wife and mother, he is survived by his two sons: Cole and Cameron Ferreira both of Attleboro; his grandmother: Lillian (Harrison) Seguin of Cumberland; his dog, Chewy and cats Domino and Will.

Visiting hours will be held on Friday, January 5 from 4-8 p.m. at the Sperry & McHoul Funeral Home, 15 Grove Street, North Attleboro.  A funeral will be held from the funeral home on Saturday, January 6 at 9 a.m. followed by a Mass at St. Mary’s Church, 14 Park Street, North Attleboro at 10 o’clock.  Burial to follow at St. Mary’s Cemetery, Attleboro Falls.

In lieu of flowers, donations may be made in Mike’s memory to Attleboro Youth Soccer, P.O Box 641 Attleboro, Ma 02703.