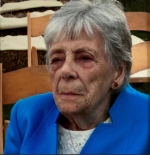 Claire Marie Miner died peacefully at her home in North Attleboro Massachusetts on Wednesday August 18th.  She was born on May 24, 1930 to Mary Elizabeth Gagne and Ernest Joseph Gagne. A funeral mass will be held on Wednesday August 25 at Grace Episcopal Church in North Attleboro at 11 AM. Followed by a funeral procession to The Miner family plot in North Stonington, Connecticut.

Claire was born in Wakefield and grew up in the village of Kingston, Rhode Island, the oldest of five girls, including Maureen Rita Yerrington, Catherine Anne Jarbeau, Ernestine Zita Swanlund and Mary Elizabeth Ohsberg.

She was the first in her family to attend college at the University of Rhode Island where she would meet the love of her life, Ralph Williams Miner JR, a World War II naval veteran. They married upon Ralph’s graduation from URI in 1952. The Miner family journey began in Providence, RI, with stops in Bedford Massachusetts, Portland Maine, Dover New Jersey before returning to their beloved New England, setting down roots in Medfield MA.

Claire was actively involved in her community, volunteering as a Sunday school teacher, church vestry leader, cub and girl scout leader and president of the Medfield Garden Club. She also found time for a part time job at Barnes & Jones, in Medfield and met many of her most dear and lifelong friends.

Later in life she moved to North Attleboro and was a tireless help in raising and supporting her grandchildren. Claire made many new friends at the Grace Episcopal Church, running a weekly bible study group.

Claire will be missed by her children Ralph (Bill) Williams Miner III (Vineyard Haven), Susan Tull (Aurora, Colorado), Deirdre D’Urso (Hopedale) and John Miner (North Attleboro). She was predeceased by her husband Ralph and oldest daughter Brenda Lee Keane. She is also survived by her 11 grandchildren and 9 great grandchildren.

A celebration of Claire’s life will be held at a later date. In lieu of flowers, donations may be made to the Grace Episcopal Church, 104 North Washington Street, North Attleboro, MA 02760.