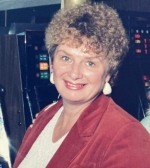 NORTH ATTLEBORO – Dorothy M. Grant, 78, of North Washington Street passed away Sunday, August 15, 2021 at Brigham & Women’s Hospital in Boston.  She was wife of the late Leslie Grant for 46 years until his death in 2020.

Born November 25, 1942 in Boston, she was a daughter of the late Vincent and Margaret (Donahue) Kohansky.

She enjoyed cooking and caring for her family.

Dottie loved to travel, especially to Spain where she took three trips.  She also took in several exchange students over 15 years.

She was sister of the late William Kohansky.