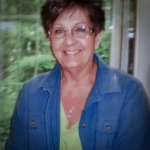 Gail (Papini) Masse, 77, of Seekonk, Massachusetts, passed away early morning at their home on August 8, 2021 after a long battle with cancer. She was surrounded in her final hours by her loved ones.

Gail is survived by her husband Ernest J. Masse, Jr., her three daughters Michelle Masse, Melissa (Masse) Lambert and Mary (Masse) Hill, her two son-in-laws Christian Lambert and Daniel Hill, her sisters and their husbands Carla and Raymond Michaud, Sara and Ted Johnston, her brother and his wife Charles and Margaret Papini, her four grandchildren, Casey and Christian (Chip) Lambert and Nathan and Abby Hill.  She was predeceased by her older sister, Judith (Papini) Souza.

Gail was born in Central Falls, RI to Gertrude and Charles Papini on June 12, 1944.  She went to school at Tolman High School in Pawtucket, RI.  She married Ernest Joseph Masse, Jr. on January 17, 1963 at St. Leo’s Church in Pawtucket. She was a wonderful wife and mother for 58 years. Gail was an avid knitter, reader, and golfer. She also enjoyed going to the beach, watching her beloved Red Sox, listening to music, and spending time with her grandchildren and family.

A funeral mass will be held 9:00 am, Saturday, August 28th at Our Lady Queen of Martyrs Catholic Church, Coyle Drive, Seekonk, MA 02771.

In lieu of flowers, the family requests donations be made to the Seekonk Animal Shelter in Memory of Gail Masse at 100 Peck Street, Seekonk, MA 02771.