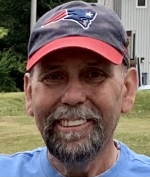 surrounded by his loving family.  Wendell had lived for many years with chronic illness which he

kept private from many who knew him.   At the time of his death, Wendell had been waiting for

a liver transplant which heartbreakingly did not come to be.

Wendell is the loving husband and best friend of Nancy Pineo (Werner) and the proud Dad (Pops) to Eric Pineo and Scott Pineo of North Attleboro.  He leaves his devoted Mom, Dorothy (Dot) Pineo and was predeceased by his Dad, Eugene (Tup) Pineo.   Brother-in-law to Mark Werner, Allan Werner and Hugh & Jackie Werner, proud Uncle to Nick, Chris, David, Alicia, Allison and Kimberly and their families.

Wendell was born in Wolfville, Nova Scotia and moved to Massachusetts in 1962 with his parents.  He grew up in Norfolk playing sports, ice hockey on the town pond, working on cars and as a teenager working in construction with his Dad and the crew. Being an only child, Wendell spent a lot of time in Medfield at his Aunt & Uncle Bub and Crit Weir’s house with his cousins, David, Sue, Terri, Kevin and Rob and all the kids from the neighborhood of Granite Street.  Always full of fun, his family, cousins, especially Tim and friends all have great memories of Wendell’s pranks.  Growing up there were yearly trips to New Brunswick and Nova Scotia to visit Grandparents, numerous Aunts, Uncles and cousins.

After graduating High School, he joined the U.S. Marine Corp., proudly serving and was part of the U.S. peacekeeping mission in Beirut in 1982.   Wendell was honorably discharged in 1983 and returned to Norfolk where he started his profession working in the automotive business for over 30 years.  Always willing to help lend a helping hand to friends and family, he remained a true American throughout his life.

Wendell met his wife Nancy in Medfield in 1978 and they were married in October of 1985.  Sons Eric and Scott were welcomed a few years later and their family life began.  Watching his sons grow, attend school, play sports brought much happiness and joy.  Helping coach his sons in baseball and football was a favorite pastime.  Family vacations always included a trip to an amusement park where the adults would have as much fun as the kids.  Countless family holidays and family vacations to Canada, Cape Cod, New Hampshire, Williamsburg, VA, Virginia Beach, Disneyworld will remain in our hearts.   Precious memories of camping and riding dirt bikes with his sons and friends will not be lost.

As a couple, trips to North Carolina, Nashville, TN, Canada; attending concerts especially Country Fest at Gillette stadium, shopping at vintage stores, drives in their convertible Mustang and just being together are treasured memories that will remain.  A fun-loving person, Wendell is deeply missed.

Family and friends are welcome to Visiting hours at Sperry McHoul Funeral Home, 15 Grove Street North Attleboro on Thursday, 8/5 from 4:00 – 7:00 pm.  Military honors will be presented.  Funeral Service will be held on Friday, 8/6 at 11:00 am at Grace Episcopal Church 104 N. Washington St., North Attleboro.

After the funeral service all are invited to lunch at the American Legion, 44 South St. (Route 1A) Plainville.   In lieu of flowers, donations may be made to the United Network for Organ Sharing (UNOS)

or a charity of your choice.

To sign an online guestbook for Wendell, please visit www.sperry-mchoul.com.