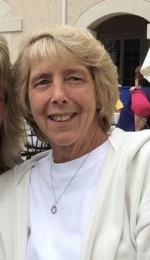 PLAINVILLE – Maureen E. Clark, 61, of South Street passed away Sunday, July 18, 2021 at Sturdy Memorial Hospital.  She was the beloved companion of Paul Wisniewski and wife of the late Michael Clark who died in 2011.

Born October 31, 1959 in Attleboro, she was a daughter of the late Edward and Elizabeth (Andrews) McCretton.

After high school, she worked at Bristol County Savings Bank and then at Mosher Irrigation in Norfolk for several years.  She retired as the office manager at Bracket Landscaping in Foxboro.

She enjoyed travelling, particularly her trips to Florida and Maine and loved entertaining her friends and family by the pool at her home.  Maureen had “Moe’s Snack Shack” by the pool for serving food and drinks.

She also loved shopping and going on sister trips to the casinos and dearly loved beaches and the ocean.

In addition to Paul, she is survived by her six siblings: Kathy McGowan, Nancy Blasé, Colleen Cavanagh, Jane Gannon and husband Tom, Edward McCretton III and wife Nancy, and Timothy McCretton and wife Denise and many nieces and nephews.

A funeral will be held from the funeral home on Wednesday, July 28 at 9:00 a.m. followed by a Mass at St. Mark’s Church, 105 Stanley Street, Attleboro Falls at 10 a.m.  Burial to follow at Mt. Hope Cemetery & Arboretum, Attleboro Falls.