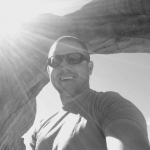 Matthew Ryan Vacher died on Monday, June 14, leaving this world a legacy of two adventurous daughters, several “priceless” works of art and countless shorter honey-do lists. Matt, as he was known by his friends and family, was born 39 years ago at Sturdy Memorial Hospital in Attleboro to Ronald and Elizabeth (Butterworth) Vacher. After graduating from North Attleboro High School in 2000, he ventured out west to Colorado and Utah. Six years ago, he returned to the East Coast, settling in Braintree to raise his girls closer to his dad, siblings, nieces and nephews.

While in Colorado, he put himself through college by running a house-painting business and building loft beds for classmates at the University of Colorado, Boulder. In 2005, with a bachelor’s degree in economics and political science, he kicked off a decade-long career in finance. As a retirement and planning advisor, he was known for his integrity and personal commitment to his clients’ individual needs. When he relocated to Utah, working for Fidelity, he also resumed his entrepreneurial pursuits by opening his first of two Painting With a Twist businesses. This allowed him to tap into his creative side. He could coax art and a smile out of anyone—even folks who had no prior experience with a painting. And he fostered a fun, unforgettable experience with just the right selection of music. For the past 12 years, he owned Curly Dog Handyman, helping neighbors with small and medium-sized jobs. Since he loved working with his hands, it was often enough to offer him pizza and a beer and he’d be at your doorstep with his tools, ready to start.

Matt was an avid outdoorsman and athlete—most at home in the woods, mountains and on the water. He particularly loved fishing, hiking, snowboarding and hunting. He strived to bestow an appreciation for these adventurous pastimes to his daughters Madeline, 10, and Celine, 6, by taking every opportunity to fish and hike with them. As a devoted father, he wasn’t stingy with booboo kisses or his time. He could be seen picking the girls up from school, coaching Madeline’s lacrosse team or moving over to make room for the girls to snuggle in bed. He was born to be a #girldad.

All who knew him, loved him. Whether in a one-time encounter or a lifelong friendship, you would get the full Matt experience. He was always ready with a joke or movie quote. And as a deeply empathetic person, he was just as quick to share his innermost feelings or support others who were going through rough times. His commitment to friends, animals—domestic and wild—and family was unfailing.

Matt would surely want you to remember him most for his charm and good looks. His family would also like you to remember him by extending every opportunity to show care and support for those who may be struggling. Matt shared his own strength—developed through suffering great loss—with any who were down and out. In his honor, we can all remember to extend grace before judgment—always.

Matt is survived by his beautiful daughters and their mother, Candice Sigur Vacher; his father, Ronald Vacher; and his siblings: Tiffany Kut and her husband, Stephen Kut; Timothy Vacher; Stephen Vacher and his wife, Darah Vacher; Kerri Vacher-Harbour and her husband, Bob Harbour. He was the beloved Uncle to Kali, Abbey and Ryan Kut; Jared and Caitlin Vacher; and Ella Reichert-Vacher. He is also survived by a large extended family and too many friends to name.  He was predeceased by his mother Elizabeth (Butterworth) Vacher and his grandparents Fred and Elizabeth Butterworth and Roland and Rita Vacher.

There will be an intimate visitation for close family and friends on Wednesday, June 23, 4-7 pm at Sperry & McHoul Funeral Home. In the coming months, the family is also considering holding a celebration of life.

In lieu of flowers, the family encourages donations to a scholarship fund for his two daughters. A Gofund me page has also been made in their honor. Checks can be made to Fidelity Investments and sent to: