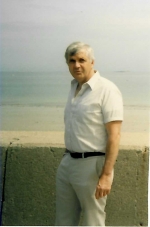 He was the beloved husband of Irene L. (Dohring) Whalen and they were married for 63 years.

He was the brother of the late William J. Whalen, Barbara A. Campbell and Walter “Timothy” Whalen and is survived by his sister Valerie J. Langille and sister-in-law Patricia A. Whalen.

He is survived by his son Paul S. Whalen and his partner Brian Machado of Pawtucket, R.I., his son Steven J. Whalen and his wife Hally A. (Henry) Whalen of Mansfield, MA and his daughter Susan E. (Whalen) Cisneros and her husband Mark Cisneros of North Attleboro, MA.

He worked for his father at W.T. Whalen Engineering Company.  Later on Paul, with his brother Bill, took over and ran the Company until his retirement in 2002.  Paul served his country in the 101st infantry regimen of the 26th “Yankee Division” MNG during the Korean war.

He belonged to the North Attleboro BPOE Elks for many years, as well as the Sons of Italy athletic club.

He was an avid reader, loved taking long walks with Irene, driving down the Cape and Newport, working in his yard, visiting with his grandchildren and great grand child as well as watching Brendan and Laura’s youth sports activities.   Mostly he enjoyed his retirement and watching the Red Sox and Patriots on his back porch.

A private viewing service will be held on June 9, 2021 at Sperry McHoul funeral home in North Attleboro from 4-6 PM

In lieu of flowers, donations may be made to the Wounded Warrior Project,  National Processing Center, PO Box 758541, Topeka, Kansas 66675-854