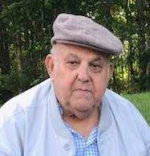 Achille J. "Gig" Rezza, 92, lifelong resident of North Attleboro, passed away peacefully in the early morning hours of Friday, April 23, 2021 surrounded by his loving family. He was the beloved husband of the late Florence (Perry) Rezza who passed away on September 25, 2010.
Born to Italian immigrants in North Attleboro on March 1, 1929 at his homestead on Dodge Avenue in Attleboro Falls where he would reside until later moving to his home on Old Post Road, he was a loving son of the late Remigio P. and Vincenza (Lepore) Rezza.
He had attended the Towne Street and Mount Hope Schools in North Attleboro and would go on to pursue his career at Boro Sand and Stone in North Attleboro for over 35 years.
A proud veteran of the United States Army, he served his country during the Korean Conflict.
In addition to doing what he loved most, spending time with his adoring family, Gig enjoyed gardening and deep sea fishing.
He is survived by his devoted and only son, Joseph P. Rezza and his wife Lucille of North Attleboro. He also leaves his cherished granddaughter, Victoria Rose Rezza of North Attleboro. He was the brother-in-law of Alice Janelle and uncle to many nieces and nephews.
He was the dear brother of the late Connie Infrate, Rose Theriault, Joseph Rezza, Anthony Rezza, and John Rezza.
His funeral, to which relatives and friends are most kindly invited to attend, will be held on Thursday, April 29, 2021 at 9 AM from the Sperry & McHoul Funeral Home, 15 Grove Street, North Attleboro, followed by a Mass of Christian Burial that will be celebrated at 10 AM in Saint Mark's Church, 105 Stanley Street, Attleboro Falls. Interment with military honors will be in Saint Mary's Cemetery, Towne Street, Attleboro Falls.
In accordance with the CDC and the Commonwealth of Massachusetts, COVID-19 guidelines will be observed during the services.
In lieu of flowers, expressions of sympathy in Gig's memory may be made to the American Diabetes Association, 330 Congress Street, 5th Floor, Boston, MA 02110.
back to top