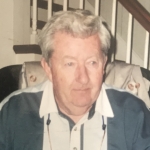 Joseph “Ray” Duffy, 88, a resident of Plainville since 1965, passed away on Sunday, April 11, 2021 at home surrounded by his loving family. He was the beloved husband of the late Joan (Crotty) Duffy.

Born in Providence, RI on September 1, 1932, he was a loving son of the late Joseph and Mary (Sullivan) Duffy.

Ray grew up in the Providence area and was a graduate of  La Salle Academy in Providence. He went on to further his education, earning his Bachelor’s Degree in Business from Providence College.

A proud veteran of the Korean Conflict, he served his country in the United States Marine Corps and was honorably discharged in April of 1953 with the rank of Lance Corporal.

In addition to the times he enjoyed most, those spent with his adoring family and friends, Ray had a lifelong enjoyment of golf (Heather Hill Golf Course) and playing cards at the North End Social Club. He was a master at telling jokes and stories, giving the gift of laughter to all who knew him.

He is survived by his devoted children, Patty Davenport and her husband Randy of Louisville, CO and John Duffy of Michigan. He also leaves his cherished grandchildren: Jessica Davenport, Ali Adams and her husband Stephen, and Joni Davenport. He was the great-grandfather of: Dominick Lewis, Tianna Davenport, Annabella Adams, and Aspen Adams. He was the uncle of Tom Duffy andJerry Duffy. He resided with his longtime partner, Ellen Renner and was blessed by becoming an additional member of the Renner family who he also leaves to mourn his passing: Jane Renner, Jim Renner, Libby Longley and her husband Jon, Lydia Longley and the late John “Buck” Renner.

He was the dear brother of the late Robert Duffy and Elizabeth Duffy.

The family would like to give a special thanks to Beacon Hospice, Kathy Gaskin, Beth Berghman, and Jane Renner for their care and support during Ray’s final days.
Finally, eternal gratitude to Joseph “Ray Renner” Duffy for being an important part of all of his family’s and friends’ lives. May our memories of him bring a smile to our face and a story to be told…

Visitation, to which relatives and friends are most kindly invited to attend, will be held on Sunday, April 18, 2021 from 4-6 PM in the Sperry & McHoul Funeral Home, 15 Grove Street, North Attleboro.

The family requests that all those attending please go directly to church on the morning of the funeral. There will be no procession from the funeral home.

Per the Commonwealth of Massachusetts and the CDC, COVID-19 guidelines will be observed.