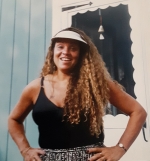 WAREHAM – Robin Ann Callahan, 64, of Wareham passed away Tuesday, March 30, 2021 at St. Luke’s Hospital in New Bedford.  She was the longtime companion of Stephen Miller.

Born June 15, 1956 in Attleboro, she was a daughter of the late Albert and Florence (Cadero) Bedard.

Robin grew up in North Attleboro and was a 1974 graduate of North Attleboro High School.  She received a BS from Johnson’s and Wales University in Rhode Island and worked in various jobs in the restaurant industry throughout her career.

She has been a resident of Wareham for the past 22 years.

Robin worked as a restaurant manager at various restaurants including the Hilltop Steakhouse in Braintree, Piccadilly Pub in Franklin and currently worked at Vel’s Restaurant in Wareham where she worked with her daughter.

Robin was a ‘people person’ and her favorite times were hanging out with family and friends.  She loved camping and travelled around the northeast in her camper and love firepits and bartending at family events.

In addition to her companion, Stephen, she is survived by her beloved daughter Casey Lynn Cormier of New Bedford; two step-sons Kyle Swenson and Derek Swenson;

Two brothers: Al Berard of Seekonk and Gary Berard of Rehoboth; and numerous nieces, nephews, cousins, friends and loved ones.

Visiting hours will be held on Wednesday, April 7 from 11 a.m to 1 p.m. at Sperry & McHoul Funeral Home, 15 Grove Street, North Attleboro.  A funeral service will be held in the funeral home immediately following visitation at 1 p.m. followed by burial at Mt. Hope Cemetery & Arboretum, Attleboro Falls.

In lieu of flowers, donations may be made to the World War I Memorial Park, 43 South Washington Street, North Attleboro, MA 02760.