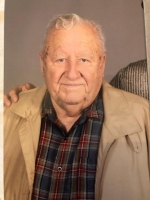 One of North Attleboro’s last remaining World War II Veterans, Mr. Peter J. Santsaver, Jr., translated to the higher plains of consciousness on Saturday afternoon, February, 27, 2021, at his Paine Road homestead with four generations of his progeny there to lovingly bid him godspeed.

Born in Central Falls, Rhode Island on March 24, 1926, the eldest of four children to Esther L. (née Landry 1901 - 2000) Peter J. Santsaver, Sr.(1895 - 1977).  In 1929 the growing family moved into Redcliff, their new model home on 10 acres of land, which had once been part of Pete’s mother’s family farm.   From there as a young boy Pete walked nearly 3 miles each way to attend Holmes Neighborhood (one room) School, and would occasionally spend summers at the Macfadden boarding school for boys in Westchester County, New York.  The family would also spent time at a home in Wrentham, MA to be closer to his father’s work, and several winters during the 1930’s in Mount Dora and Safety Harbor Florida.

Being taught the dignity of chores on the farm and self-respect associated with industrious work, Pete learned from a young age the value of time and the happiness that could be found in outdoor merriment, like riding horses with his cousins and tramping through the woods with neighborhood friends like Bob Rascher, Bobby Roberts, and the Brown family boys.

As World War II raged on in 1943, at the age of 17 Peter volunteered to serve in the US Navy, the same branch his father had served in World War I.   After attending gunnery school in Memphis Tennessee,  he was transferred to the USS Guadalcanal on the high seas using a high line and bosun’s chair.  Although Pete would never fully heal from the injuries he received as a tail gunner while on SBD Dauntless dive bombing runs, he was always willing to share memories of his time in the navy, particularly humorous stories associated with shore leave.

Shortly after his honorable discharge from the Navy in 1945, Pete met and fell in love with a spectacular blonde-haired blue-eyed beauty from North Attleboro, Miss Eleanor Jean Beckett.   The two were married in Oldtown’s First Congregational Church on June 12, 1948 and worked together to build their own home and raise seven children on some of the Paine Road farm land that Pete’s family had gifted them.   For nearly 60 years Jean remained loving by Pete’s side, as together they contributed to the community (Pete was a Sunday School teacher and Jean a Mutual Helper at Old Town Church) and ventured to far away places from Europe to Hawaii until she was called to her heavenly home in 2008.

Having been gifted with a natural ability to run precision tool making equipment, Pete earned a reputation for being able to quickly and accurately complete jobs using innovate approaches to the manufacturing process and model making.  In the 1960’s, after earning certifications as both a Quality Auditor and Quality Engineer from the American Society for Quality Control, Pete landed consulting assignments working along side Dr. Edwin Land of Polaroid fame, and General Electric’s armament  division in Burlington Vermont.   He even worked on the Lunar Roving Vehicle, or “moon buggy”, which Apollo astronauts rode on the moon in the early 1970s.  When in 1974 an opportunity to work on nuclear research projects for Argonne National Laboratories became available Pete took advantage of it by becoming certified in Boiler and Pressure Vessel Code from the American Society of Mechanical Engineers. He then worked for a time on missile guidance systems and laser defense programs for the Massachusetts Institute of Technology’s Lincoln Labs.

Although Pete created Effective Quality Engineering, Inc., to offer his talents and expertise at various nuclear power facilities throughout the country, there would be times over the years when he would work closer to home, such as in 1977 - 78, when he helped setup and teach the first machine shop curriculum at Tri County Regional Vocational High School in Franklin, MA, or building model toys for children at Hasbro Corporation in Pawtucket, RI.

Having a big heart and open mind allowed Pete to easily make lifetime friends on his longer term contracts in New York, Michigan, Illinois, Iowa, Arizona and Arkansas.  In fact in the early 1990’s Pete was invited to attend community leadership luncheons hosted by the governor of Arkansas who went on to become the 42nd President of the United States.

Even though Pete liked to keep current on the latest technological advances, like E-mail and Social Media, and write letters to the editor of local newspapers to offer insightful guidance on issues of the day, he never lost his love for sharing the best aspects of life with those around him:  Caring for animals and people in need, Breakfast with family and friends at local diners, Planting a garden every spring from seeds he sprouted himself, Donating honey harvested from his own bee hive, Enjoying the fellowship of lodge with his Masonic brothers (he was a 51 year member of Bristol Lodge), Crafting wooden heirlooms in the garage, Playing songs like Danny Boy and Humoresque on his console organ, Skunking his opponents in a game of cribbage, Singing Too-Ra-Loo-Ra-Loo-Ral and The Sweet Mystery of Life to a new born baby, and chanting HU, a love song to God, with his companion soul travelers in Eckankar.

Given the current restrictions on social gatherings, the family is planning to inter Pete’s cremains along with Jean’s at Paine Road Cemetery on June 12, 2021, the 73rd anniversary of their wedding.  A Celebration of Pete’s life and collation at Old Town Church is likely to follow.  Feel free to email:  This email address is being protected from spambots. You need JavaScript enabled to view it. to add your name to the expected attendee list.

The family would like to express its deepest gratitude to the hospice care givers at Greater Attleboro Visiting Nurses Association.  The loving aid and support Sheri, Cassie, and Erica provided for the past 17 months was like a touch of heaven here on earth and very much appreciated by Pete and all those who enjoyed hearing the sweet sound of his voice and seeing the twinkle in his eyes every time you came by.    On-line donations in Pete’s name may be made by visiting  https://www.communityvna.com/ or via mail to Community VNA, Development Department, 10 Emory St, Attleboro, MA  02703-9944

And as Pete once wrote in his many essays on the great beyond:  “If you see me in your dreams, remember to wave and say hello”.