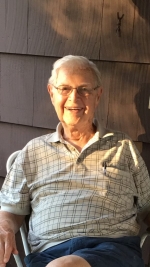 Robert Arnold Burrows, 89, of North Attleboro, passed away peacefully on Sunday, January 10, 2021 at HopeHealth Hulitar Hospice Center in Providence, RI. He was the beloved husband of 66 years to his college sweetheart and love of his life, Dorothy J. Burrows.

Born on November 16, 1931 in New Bedford, MA, he was the loving son of the late Harry and Alma (Hughes) Burrows.

Bob spent his formative years in New Bedford, MA and was a 1949 graduate of Murdock High School in Winchendon, MA. He went on to further his education, obtaining his Associate’s degree from Becker Junior College in Worcester.

He was a proud veteran of the United States Army, having served in the Korean War. He was discharged with the rank of CPL (T), at which time he married Dorothy on December 18, 1954.

Mr. Burrows was in the banking industry in North Attleboro for 42 years. At the time of his retirement, he held the position of Vice President at Bank Boston. He formerly was employed by Manufacturers Savings Bank. He had a vested interest in the town and was involved in many organizations, including Housing for the Elderly and the Salvation Army. He was a longtime member of the Lion’s Club where he served as past president and past treasurer, and was a recipient of the Melvin Jones Fellowship. He also served as the North Attleboro District Nursing Treasurer.

Bob was a communicant of Grace Episcopal Church in North Attleboro for 66 years, where he served as an usher and collector. He was loved by everyone he encountered. His wisdom and humor brought many people great joy.

Visitation, to which relatives and friends are most kindly invited to attend, will be held on Friday, January 15, 2021 from 11 AM – 12 PM, followed by a funeral service at 12 PM in the Sperry & McHoul Funeral Home, 15 Grove Street, North Attleboro, MA. Military honors will be accorded at the conclusion of the service.

A private interment will be held in Mount Hope Cemetery and Arboretum in North Attleboro, MA at the convenience of the family on a later date.

In lieu of flowers, donations in Bob’s name may be made to Grace Episcopal Church,