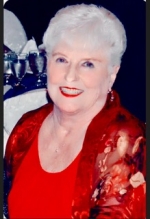 Caroline J. “Carol” Matteo, 83, longtime resident of Rockland County, NY and Long Island, NY, recently having moved to Plainville, MA, passed away peacefully on Friday, December 18, 2020 at Milford Regional Medical Center in Milford, MA. She battled a progressive autoimmune disease for decades before succumbing to COVID-19.  She was the beloved wife of the late Michael P. Matteo who passed on January 14, 1999.

Carol was raised in Brooklyn, NY and Patterson, NJ and was a graduate of Franklin K. Lane High School.

Before retiring, she had been employed as an Executive Secretary and Human Resources Administrator at Orange and Rockland Utilities Company.

Carol had a keen sense of humor and was fiercely independent. She loved music and loved to dance. When younger, she played Mahjongg, bridge and tennis. In her later years, she explored digital photography, photo editing and communing through social media. Having been a New Yorker for most of her life, she subsequently spent time living in Connecticut, and the San Francisco Bay Area of California before moving to Massachusetts in 2018. She also greatly enjoyed international travel, especially her trips to Alaska, Russia and China.

She was the sister of the late Leonard Sieranski and John Russell.

Private funeral services will be held. Cremation will follow the services and Carol’s remains will be interred in Pinelawn Memorial Park and Arboretum in Farmingdale, NY where she will be laid to rest with her late husband, Michael.

Arrangements have been entrusted to the Sperry & McHoul Funeral Home, North Attleboro, MA.

In lieu of flowers, donations can be made to the American Autoimmune Related Diseases Association, Inc., https://www.aarda.org/donate/.