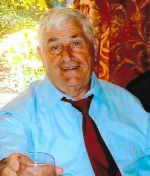 Sabatino Viscusi, 87, longtime resident of North Attleboro, passed away peacefully on Saturday, December 19, 2020 at Sturdy Memorial Hospital in Attleboro. He was the beloved husband of Dina (Palmucci) Viscusi to whom he was wed on October 26, 1957.

Born July 10, 1933 in Santa Agata Dei Godi, Italy, he was a loving son of the late Francesco and Mariantonia (Trucchio) Viscusi.

Sabatino grew up in Italy and emigrated to the United States in 1950, shortly thereafter settling in North Attleboro.

He was employed by St. Regis and Fortifiber in Attleboro for many years.

In addition to the times he most greatly enjoyed, those spent with his adoring family, he was an avid gardener, growing every kind of vegetable and made his own wine out of grapes originating from all over the world.

He also leaves a host of nieces and nephews.

He was the dear brother of the late Guido Viscusi and Cristina Della Ratta, as well as others in Italy.

A Mass of Christian Burial, to which relatives and friends are most kindly invited to attend, will be celebrated on Wednesday, December 23, 2020 at 10 AM in St. Mary of the Immaculate Conception Church, 14 Park Street, North Attleboro.

Interment will follow at St. Mary’s Cemetery in Attleboro Falls.

Visitation has respectfully been omitted.

Per the CDC and Commonwealth of Massachusetts, COVID-19 guidelines will be observed.

In lieu of flowers, expressions of sympathy can be made in Mr. Viscusi’s memory to a charity of one’s choice.