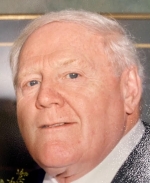 William C. “Gus” Gorham Sr., 86, resident of Weymouth, MA for 57 years before recently moving to North Attleboro, MA passed away peacefully at his daughter’s home on Thursday, December 17, 2020. He was the beloved husband of the late Ruth P. (Flansburg) Gorham.

Born in Boston on February 11, 1934, he was the loving son of the late William and Mary (Colbert) Gorham.

Gus grew up in the Dorchester section of Boston and attended Dorchester High School.

A proud veteran of the Korean Conflict, he served in the United States Navy on the USS Salem CA-139 and was discharged with the rank of boatswain’s mate third class.

For most of his life, he worked predominately in the tool and dye industry and was employed by Jet Products in Braintree for many years.

Gus played semi-pro football when younger and was a diehard New England Patriots fan since the very beginning. He served as scout master for the Boy Scouts of Troop 73 in Weymouth. Gus was a member of the Viking Club in Quincy and also greatly enjoyed ballroom dancing with his wife, frequenting the German Club in Walpole.

He is survived by his devoted children: Dianne Freedman and her husband Edward of North Attleboro, MA; William Gorham Jr. of Roslindale, MA; Robert Gorham and his wife Donna of Plympton, MA; Jayne Mocker and her husband Kevin of Attleboro; and Karyn “Hildi” Bowen and her husband Brian of Holyoke, MA. He is also survived by his cherished grandchildren: Rhiannon Gorham of Quincy, MA; Nicholas Gorham and Yana Gorham of Plympton, MA; Kyle Mocker of Taunton, MA and Jake Mocker of Attleboro, MA. He was the dear brother of Dorothy Curry of Dorchester, MA and Daniel Gorham of Thayer, Missouri.

He was the brother of the late Margaret Gibson and Mary Keeley.

Visitation, to which relatives and friends are most kindly invited to attend, will be held on Tuesday, December 22, 2020 from 5-7 PM in the Sperry & McHoul Funeral Home, 15 Grove Street, North Attleboro, MA with a funeral service beginning at 7 PM. Full military honors will be accorded at the conclusion of the service.

Per the CDC and Commonwealth of Massachusetts, COVID-19 guidelines will be observed.

Interment will be held privately at the convenience of the family in the Massachusetts National Cemetery in Bourne, MA where Gus will be laid to rest with his late wife, Ruth.

In lieu of flowers, expressions of sympathy in Gus’s memory may be made to the American Cancer Society, 3 Speen Street, Framingham, MA 01701 or to MSPCA-Angell, Attn: Donations, 350 South Huntington Avenue, Boston, MA 02130.