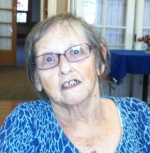 NORTH ATTLEBORO – Phyllis Jean Aldrich, 75, passed away on December 1, 2020 at Madonna Manor Nursing Home in North Attleboro.  She was the wife of the late Edwin Aldrich whom she was married to for over 40 years before his death 15 years ago.

Born in Boston on December 19, 1944, she was the daughter of the late Robert and Ethel (Getz) Fink.

Phyllis grew up in Jamaica Plain and Millis, MA.  She spent many years in Whitinsville, and many years in Laurel Springs, NJ before moving to North Attleboro 7 years ago.

She worked as a teacher’s aide in Douglas school for the special needs children. She also worked in Whitinsville as a driver bringing young men and women back and forth to work. When she moved to New Jersey she got a job working for Archway Homes. She loved her job. She worked as a nurse’s aide for Mentally challenged Elderly Women. She referred to them as "her ladies".

Phyllis loved spending time with her family and friends. Often getting together with family and playing cards... Bid Whist especially, she loved going to cookouts and was always asked to make the potatoe salad...YUM!

On holidays she was the one who made the apple pies, but didn't eat them herself.

She liked the beach even though she couldn't swim. She also had a love for animals, cats and dogs especially. She enjoyed going to the aquariums and zoo's. She also loved plants and flowers.  Last but certainly not least she was proud of her father and brother who served in the military (Navy).  Her father served in World War II and her brother in the Vietnam War.

Phyllis is survived by her daughter Jean Hayward and her husband Scott of North Attleboro and her son Ronald Aldrich of Haddon Township, NJ.; her grandchildren Erin Jean Schmalbach, Brandon Hayward, and Robert Hayward; her great-grandchildren Rayelynn, Matthew and Maizah.  She was the sister of Robert Fink, Jr. and his wife Peggy of NJ.; the aunt of Sharon and her husband Albert Dickel and the great-aunt of Angelina and Ryan.

Visitation for Phyllis will be held on Saturday, December 12, 2020 in the Sperry McHoul Funeral Home, 15 Grove Street, North Attleboro from 2 to 3 p.m. followed immediately by a Memorial Service at 3 p.m.