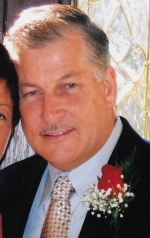 NORTH ATTLEBORO – Albert J. Houle, Jr., 66, of Paine Road passed away Wednesday morning, November 29, 2017 at home surrounded by his family after a courageous 2-year battle with cancer which he handled with dignity and grace.

He was the loving husband to his high school sweetheart, JoAnn Mary (Tucci) Houle for 45 years.

Al grew up in Attleboro and was a 1969 graduate of Attleboro High School.  He served the U.S. Army during the Vietnam War and was discharged in 1971 and moved to North Attleboro after marrying JoAnn in 1972.

After the army, he worked at Automatic Machine in Attleboro for several years and as a flooring installer.  In 1981 he opened Houle’s Floor Covering Center in North Attleboro which he owned an operated until his illness.

Al was a longtime communicant of St. Mary’s Church and loved travelling.  He travelled around the world including several trips to Italy to see family.  He spent summers in New Hampshire where he enjoyed fishing and boating.  He also snowmobiled in the winter in New Hampshire.

Al was an avid golfer and loved playing golf with his friends and JoAnn.  He also loved sports and played baseball at Attleboro High School.

He was brother of the late Neil Houle.

Visiting hours will be held on Sunday, December 3 from 4-8 p.m. in the Sperry & McHoul Funeral Home, 15 Grove Street, North Attleboro.  A funeral will be held from the funeral home on Monday, December 4 at 10 a.m. followed by a Mass of Christian Burial at St. Mary’s Church, 14 Park Street, North Attleboro at 11 o’clock.  Burial to follow at St. Mary’s Cemetery, Attleboro Falls.

Al’s family would like to thank all of their friends for the tremendous support you’ve given them throughout Al’s illness.  A special thanks to Dr. Mona Kaddis at Milford Hospital, Dr. David Reardon at Dana Farber and Dr. Julian Wu at Tufts Medical Center.

To sign an online guestbook for Al, please visit www.sperry-mchoul.com.