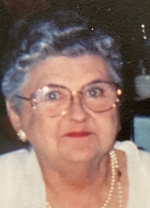 NORTH ATTLEBORO – Shirley B. Parker, 92, a longtime resident of North Attleboro passed away on Thursday, September 24, 2020.  She was the beloved wife of the late James “Louie” Parker, Sr. who passed away in 2013.

Born September 29, 1927 in Pawtucket, RI, she was a daughter of the late Leodore G. and Catherine (Walsh) Bouler.

Shirley grew up in Providence, attending Oliver Hazard Perry Junior and Hope High Schools. She was a talented singer and performer, singing on the Celia Monroe Show on WJAR in Providence, RI and the local theatre circuit on the weekends. where she was noticed nationally for her talents.

During a regular performance at Fay’s Theatre in Providence she met Roy Rogers.  Rogers who, having heard her sing, insisted she come to New York City, where she performed with him until World War II.  During the war, she toured the United States to perform at various USO Shows and learned a love for the beauty of this country and the places she would see. She retired from singing in 1947 after an extended illness.

She married and lived for many years in Chicago Illinois, but eventually missed her Rhode Island roots. No longer performing, she worked as a banquet waitress and hostess at various establishments to support her children. She was working at Peg Leg Pete’s in North Attleboro when she met Louie and they married soon thereafter. Together they established and ran both the Parker’s Lounge in the 1970’s and then J&S Snack Bar at North Bowl for over 30 years before retiring. Their steadfast policy was to let no one go hungry no matter if they could afford to pay.

She loved Old Westerns, was an avid reader, and crafter, creating beautiful beadwork, and personalized Christmas stockings for her children and grandchildren.  She especially loved Christmas and she and Louie were famous for their Christmas parties and backyard barbeques. They lived on Quinn Street, where the door was always open, and the coffee pot was always on.

In her youth she loved the outdoors.  She loved fishing, archery and shooting.  She also had extensive flower and vegetable gardens at her home.

They were parents to the late Marcia Lee Pouliot and Louis F. Parker.

Shirley was predeceased by two siblings: Donald L. Bowler and Vivian C. Bernier and was proud to be great-great-niece to the late Brother André Bessette, who was beatified in 1982 and canonized as a saint in 2010.

In lieu of flowers, donations may be made to benefit those in need to Lenore’s Pantry, 43 South Washington Street, North Attleboro, MA 02760.