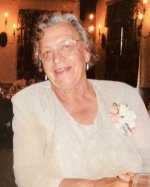 Maria Lourdes (Duque) DaCosta, 92 of Attleboro passed away peacefully on September 8, 2020 at Attleboro Life Care Center. She was the loving wife of her predeceased husband Antonino DaCosta for forty-five years.

Maria was the daughter of the late Antonio Furtado Duque and Mariana de Deus (Rodrigues) Duque. She was born in Sao Miguel, Azores, Portugal on June 29, 1928.  After marrying her husband Antonino in 1946, she immigrated to Canada, then to the United States settling in the town of Attleboro where they raised a family and happily remained after the children were grown.

Maria became a US citizen after immigrating and was proud to be an American, however she maintained her heritage by visiting family back in the Azores and remaining active in her Portuguese traditions.

Maria regularly attended Holy Ghost Church in Attleboro and was an active member within the parish being involved with many religious celebrations.
She enjoyed working at the Balfour Company in Attleboro for over 20 years.  Later Maria was employed at The Foxboro Company in Foxboro, MA where she retired from in 1989.

Maria enjoyed her home, gardening, crocheting, all her many pets, traveling with her husband and friends.  However her greatest enjoyment in life was her family.

She was the sister of the late Antonio Duque, Joseph Duque, Urbano Duque, Armando Duque, and Manuel Duque.

Family and friends are cordially invited to attend visitation on Monday, September 14, 2020 from 8:30 AM – 9:30 AM  at Sperry and McHoul Funeral Home, 15 Grove Street, North Attleboro, Massachusetts.

A Funeral Mass will be held on Monday September 14, 2020 at 10:00 AM at Saint Vincent DePaul Church, 71 Linden Street Attleboro, Massachusetts.

Graveside services will take place in the Saint John's Cemetery.

In lieu of flowers, memorial donations may be made to Our Lady of LaSalette Shrine of Attleboro.