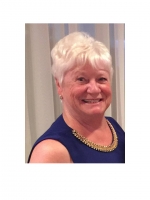 NORTH ATTLEBORO – Linda Ann McEvoy, 73, of Whalen Drive passed away early Saturday morning, August 29, 2020 at home surrounded by her devoted family.  She was the loving wife of Herb McEvoy for 53 years.

Born May 25, 1947 in Boston, she was a daughter of the late Robert and Claire (Henderson) Hudson.

Linda grew up in the Hyde Park neighborhood of Boston and was a 1965 graduate of Hyde Park High School.

She and Herb moved to North Attleboro in 1970 where she raised her two children.

Linda loved boating and going to Block Island.  She especially enjoyed time with her family and particularly her grandchildren.

She loved traveling, going on many trips to Captiva Island in Florida.

She was a longtime communicant of Sacred Heart Church where she volunteered as an usher and performed faithfully at every Christmas Eve Mass as the “pivot girl”.

A funeral Mass will be celebrated on Tuesday, September 1 at 10 a.m. at St. Mary’s Church, 14 Park Street, North Attleboro.