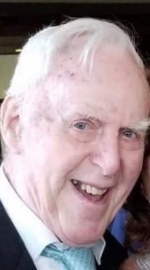 NORTH ATTLEBORO – Richard A. “Dick” Bonenfant, 86, of Roosevelt Avenue passed away Tuesday, August 25, 2020 at home surrounded by his devoted family.  He was the beloved husband of Mary (Moore) Bonenfant for over 63 years.

Born January 9, 1934 in Manchester, NH, he was a son of the late Donat and Oneida (Daneault) Bonenfant.

Dick grew up in Allenstown, NH and has been a resident of North Attleboro since 1964.

He worked as a foreman at New England Concrete in Plainville for 20 years and previously worked for 11 years at Monarch Industries in the Providence shipyard as a cabinet maker.

Dick was a skilled carpenter and an avid woodworker.    He was a longtime communicant of Sacred Heart Church in North Attleboro and was devoted sports fan of the Boston Bruins, New England Patriots, which his family had season tickets of for many years and the Red Sox.

He was a longtime member of the North Attleboro Lions Club and the Knights of Columbus.

In addition to his wife, he is survived by five children:

He was father-in-law of the late Scott Lucchetti.

A private Mass will be held with burial at St. Mary’s Cemetery in North Attleboro.

In lieu of flowers, donations may be made to La Salette Shrine, 947 Park Street, Attleboro, MA 02703.

To sign an online guestbook for Dick, please visit www.sperry-mchoul.com.