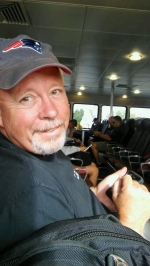 NORTH ATTLEBORO – Steven J. Eighmy, 66, of North Attleboro passed away unexpectedly on Friday, August 14, 2020 at Sturdy Memorial Hospital.  He was the beloved husband of Sylvia (Petrella) Eighmy for 45 years.

In March of 2020, Steve retired from Amtrak after 30 years of service where he worked as the C & S Compliance head for the New Engineering Division.

Prior to his work at Amtrak, he worked for 11 years as an engineer at Martin Copeland in East Providence and also at Fairfield Optical in Mansfield for five years.

Steve was a longtime devoted communicant of St. Mary’s Church (now Transfiguration of the Lord Parish) in North Attleboro where for many years ran the St. Patrick’s Day dinner at the church.  He was a longtime member of the Knights of Columbus, serving as Grand Knight three times, including during the Centennial Year of the Council.

Steve was devoted to his community and involved in Early Intervention, raising money for the Kennedy Donovan Center through spaghetti suppers and also volunteered at the La Salette Shrine’s Labor Day Festival for many years.  He also organized Christmas parties each year for senior citizens, originally at the Knights of Columbus Hall and later at St. Mary’s Church.

He had many passions and hobbies, including cultivating his famous vegetable garden, traveling to many countries with his wife Sylvia and his many friends, carpentry and woodworking, fishing, scuba diving, softball, bowling, and building model airplanes and spaceships.

Steve was a devoted husband, father, and grandfather.  He loved spending time with his family, playing with his grandkids, cooking delicious meals, and selflessly helping out with home improvements at the homes of friends and family.