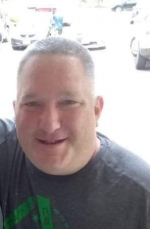 Born December 1, 1971 in Attleboro, he was the son of Janice Ringuette of Attleboro and the late Armand Ringuette.

Michael grew up in North Attleboro and was a 1990 graduate of Tri-County High School where he studied auto body and was captain of the wrestling team.

Michael was employed as a garage door installer and a carpenter.  He also was a cook for several restaurants.

He enjoyed cooking, eating, and just hanging out with friends.  Michael was a great artist and enjoyed drawing.  He was always there for his family and friends, especially for his mother.
In addition to his mother, Janice, Michael is survived by his sister Laurie Ringuette and her husband Steve Palazini, his brothers Chris, Matt and Shaun Ringuette and his children and grandchildren.

Michael was predeceased by his father Armand Ringuette and his nephew Jason O’Brien.