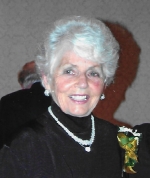 Born April 8, 1932 in East Providence, RI, she was a daughter of the late Robert A. and Ada (Whitney) Morrissey.

She was a devoted homemaker, raising her four children and enjoyed travelling.  She also loved flower gardening and decorating her home.

Ada also cherished time spent with her family and cooking.

She is survived by her four children: Kathy O’Donnell of Cumberland, RI, Karen Crowder of North Attleboro, John O’Donnell of Pascoag, RI and Jeff O’Donnell of Deerfield;

In lieu of flowers, donations may be made to either the Alzheimer’s Association, 225 N. Michigan Ave., FL 17, Chicago, IL 60601 or the Lighthouse Association Appreciation Fund, 425 Albion Road, Lincoln, RI 02865.