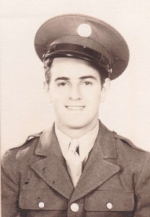 NORTH ATTLEBORO – Peter J. DiRenzo, 98, of Ryder Road passed away peacefully on Saturday, May 23, 2020 at home surrounded by his loving family.  He was husband of the late Rita (Larocque) DiRenzo for over 61 years before her death in 2007.

Born June 8, 1921 at home in North Attleboro, he was a son of the late Joseph and Marguerite (Nardelli) DiRenzo.

Peter attended North Attleboro High School and left early to enlist in the U.S. Army, serving during World War II.  In 2017 he was proud to receive his diploma along with others in a Veteran’s ceremony.

He was the proprietor of Hometown Motors on Route 1 for over 30 years and was a longtime member of the American Legion in North Attleboro.

Peter enjoyed music, traveling, the Patriots and dancing.  He also cherished time spent with his family.

He is survived by his two daughters: Elaine Franco of Smithfield and Sheila DiRenzo of North Attleboro;

And many nieces and nephews.

He was brother of the late Frank DiRenzo, Mary Picchi and Albert DiRenzo.

Services will be held privately with burial at St. Mary’s Cemetery, Attleboro Falls.

Peter’s family would like to give special thanks to Dr. Iwubal Dhaliqal and Dr. John Kinch for their compassionate care over the years.