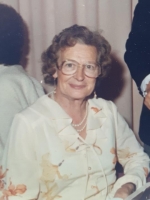 Marion Eva (Going) Vose, 103, passed away on May 10, 2020 at Madonna Manor following a brief illness. She was the widow of Lester E. Vose Sr. Born in Barton, Vermont, on August 23, 1916 she was the daughter of the late Mildred (Rash) Leavitt and the late Perley Going.

Marion worked many years in the Attleboro area, sometimes three and four jobs at a time including Swanks, Balfour Company, Texas Instruments, Morin’s Catering Service, Slater’s Catering, and a school bus driver for the City of Attleboro. After retirement she and her husband enjoyed traveling around the country and cruising with the Royal Travelers. She was active with the Sturdy Memorial Women’s Golf Club and the North Bowl bowling leagues. She enjoyed crocheting, cooking, table games, puzzles and reading.

She is survived by four daughters, Joan Watters of Attleboro, Gail Hicks of Attleboro, Priscilla Moore and her husband Kenneth of Plainville and Nancy Oliver and her husband William of North Attleboro, three sons Lester Vose Jr. and his wife Jackie of Frostproof, FL, Allen Vose of North Attleboro and Donald Vose of Chandler, TX. Her son Richard Vose passed away in 2016. She had 21 grandchildren, 28 great grandchildren, and several great great grandchildren. She had two sisters Edith Murray and Marjorie Fagundes and a bother Bernard Going that were predeceased. She also leaves many nieces and nephews.

Calling hours are omitted and burial will be private at an undetermined time. In lieu of flowers donations to United Methodist Church, 20 Hoppin Hill Avenue, North Attleboro, MA 02760 will be welcomed.