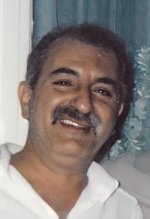 Anastasios Augoustakis, better known as Taso, 68 years old, passed away from congestive heart failure and failure to thrive on Monday, April 20, 2020 at the Colony Center for Health and Rehabilitation in Abington, Massachusetts.

Taso was born in Piraeus, Greece on January 6, 1952 and grew up in Athens, Greece. He worked for a Mediterranean cruise company and in 1976 on a cruise to the United States, his curiosity was sparked to explore and start a life in the U.S. At age 24, he moved from Greece to Coventry, Rhode Island where his friend, also from Greece welcomed him to come work at his pizza shop. In 1993, Taso took these skills to run his own pizza business at Zorba’s Pizza in Randolph, Massachusetts for the next 15 years. He later sold the business. He got married in Greece in 1984 and then started a new life and family with his wife Sophia in North Attleboro, MA before moving to Abington, MA where he spent the last few years of his life. Taso loved cooking, eating ice cream, the Boston Red Sox and New England Patriots, making jokes, going to amusement parks with his kids – especially to Rocky Point, playing board games and video games with his kids, going for drives, watching Jay Leno, watching movies, and was very proud of his Greek heritage. He also was the best pizza and sub maker around!

Along with his daughter Ellena, Taso is survived by his wife Sophia, his son George, all of North Attleboro, and his aunt, uncle, and cousins in Greece. He will be missed. May he rest in peace.

Due to the current and unfortunate pandemic of COVID-19, funeral services were held privately.  Taso was laid to rest on Wednesday, May 6, 2020 at North Purchase Cemetery in Attleboro.