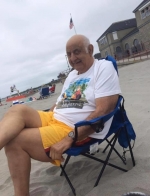 Born July 16, 1933 in Pawtucket, RI, he was a son of the late Joseph and Carmala (Campaneillo) LaValley.

Joe grew up in Pawtucket and was a longtime resident of North Attleboro before moving to Attleboro in 2015.

He was a mason and owned his own company doing various concrete work including building pools, form work and general masonry.

He later worked for the North Attleboro School Department at Amvet School as a custodian for 10 years before retiring at age 70.

Joe loved “Junking” and fixing things.  His greatest asset was his work ethic.  He would always say “Good work pays off”.  He also loved the beach and the salt water.

He is survived by four children: Joseph F. LaValley, Jr. and wife Millie of Carlisle, PA, Carol LaValley of Norfolk, Joanne LaValley all of Attleboro and Emily Miller and husband Randy of Cumberland, RI;

Services will be held privately, with burial at Shepardville Cemetery in Plainville.