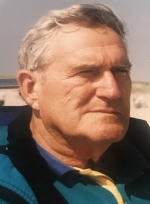 CUMBERLAND – Edward H. Andre, 94, of Cumberland, RI, and formerly of North Attleboro, passed away unexpectedly on Monday, April 13, 2020 at Rhode Island Hospital.  He was the loving husband of the late Cynthia S. (Soley) Andre for 61 years until her passing in 2014.

Born December 19, 1925 in Fairmont, WV he was the son of the late Carl P. and Dortha (Howard) Andre. Ed lived in West Virginia until moving to Point Marion, PA in his youth.  After high school, he joined the U.S. Navy at age 17 and proudly served his country in World War II.

After the war, he earned a BA in History and Communications from West Virginia University, graduating in 1950. While at WVU, he was active in many groups and was a proud member of the Sigma Chi Fraternity. Ed was a lifelong fan of the WVU Mountaineer football team.

Network as a cameraman for many notable shows, including The Jackie Gleason Show and Captain Video, which were broadcast live. While working in New York, he met and married Cynthia, who was the love of his life for 61 years. They moved to Binghamton, NY where Ed worked as a director for Triangle Networks and later to Altoona, PA where he worked as a production manager. In 1960 Ed and Cynthia moved their family to Framingham, MA. Ed then worked for WHDH-TV in Boston as a production manager from 1960-1970.  Following that, with a few close industry friends, he started Videocom, Inc. which was the first production company in the Boston area making commercials using high-quality video.  In 1975 Ed became the production manager at WCVB -TV in Boston for 16 great years, retiring in 1991.

For many years Ed devoted his time as a volunteer for the Shriners Hospital for Children in Boston. He was a dedicated volunteer at the local cable station, North TV, in North Attleboro for over 20 years, where he interviewed veterans and politicians and filmed town meetings.

Ed loved his family, his close friends, working in television, big band music, jazz, camping with his sons, the Patriots and the Red Sox, a really good martini, a perfectly manicured lawn and anything to do with West Virginia. He was a great guy through and through who will be deeply missed.

He was the loving father of Ellen Poholek and her husband Gary of North Attleboro, James Andre and his wife Alicia of Concord, Robert Andre and his wife Carol of Andover and John Andre and Kelly Andre of Walpole. Ed was the proud grandfather of Drew, Rachel, Malina, Brianna, Nicole and Justin.

He was the dear brother of the late Susannah Knight and the special cousin of the late Nancy Skinner.

Due to the current health crisis, visitation has been respectfully omitted. A private burial will be held at St. Mary’s Cemetery, Attleboro Falls and the family will have a Memorial Mass and gathering at a future date.

In lieu of flowers, donations may be made to: The Edward Andre Scholarship Fund, c/o North TV, Attn: Peter Gay, 93 South Washington St., North Attleboro, MA 02760. Three $500.00 scholarships are awarded annually to students who will be going to college full-time in communications-related majors.