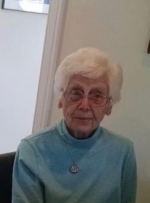 PLAINVILLE – Edna May (Auty) Goodman-Gucwa, 100 years old, of Berry Street passed away Monday, April 13, 2020 at home surrounded by her loving family.  She was the wife of the late William “Bill” Goodman who passed away in 1980 and the late Eugene “Gene” Gucwa, who died in 2009.

Born February 26, 1920 in Plainville, she was a daughter of the late George and Gertrude (Sanford) Auty.

She worked as a teacher’s aide in the Plainville School system for most of her career before retiring over 30 years ago.  She previously worked as a telephone operator for several years in Taunton.

Edna was a longtime devoted communicant of Grace Episcopal Church in North Attleboro.

She was an avid reader and a devoted Red Sox fan.  Edna spent many winters in Boynton Beach in Florida and cherished time spent with her children and grandchildren.

She was predeceased by her daughter, Carolyn Barboza.

Edna is survived by three grandchildren: Jonathan Barboza and wife Alyson of Plainville, Brian Barboza of South Boston and Elizabeth Foley and husband Brian of Raynham;

Also devoted family, Ellen Renner and Joseph Duffy, with whom she shared her home.

She was predeceased by family members Betty and Eric Renner and John Renner.

A private graveside service will be held at Plainville Cemetery.  A funeral Mass will be celebrated at Grace Episcopal Church at a later date.

In lieu of flowers, donations may be made to either Compassionate Care ALS, PO BOX 1052, West Falmouth, MA 02574, or to Grace Episcopal Church, 104 North Washington Street, North Attleboro, MA 02760.

Edna’s family would like to send a special “Thank You” to Accent Care Hospice Services in Westwood for their compassionate care for the last two weeks.

To give online condolences to Edna’s family, please visit www.sperry-mchoul.com.