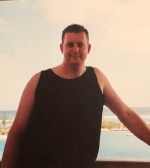 NORTH ATTLEBORO - Leslie Carmon Burns Jr. “Les”, 60, of North Attleboro, MA, passed away on Monday, April 13 2020 due to complications from diabetes.  He was the only son of the late Leslie C. Burns Sr. and late Mary (Stanley) Harris, born in Attleboro, MA on March 24 1960.

Les, a ‘78 NAHS Graduate, was a true “townie” growing up and living in North Attleboro his entire life. He was a foreman at Traffic Markings in Franklin for over 20 years. He also worked at Markings Inc. out of Pembroke before he retired due to health restrictions. In his recent years, Les enjoyed working part time for Nolan’s Flowers of Attleboro Falls delivering flowers and smiles to people’s front doors.

Over the years, he spent the winters snow plowing locally, enjoyed an annual long summer weekend away camping with family friends, tackling the home repair “to-do list,” mastering the grill and relaxing by the pool. He was an enthusiastic New England Patriots fan and was a season ticket holder for many years.  He loved his family and friends and loved how his family was expanding with the recent additions of his grandchildren.

Les’ personality and warmth were bigger than he was.  He was known as fun-loving, gregarious, funny, respectful and kind.

He is survived by his wife of 35 years, Ann (MacDonald) Burns, his son Ryan Burns and wife Kristin of Foxboro and their two daughters. His daughter Katie Burns of North Attleboro, sisters; Judy Burns and her partner Pam Neville of Jamestown RI, Karen Stanford, her husband John and their son Sean of Jamestown RI and Gail Seegraber, her husband Paul and their daughter Sarah of Quincy, MA.  He adored and cherished the short time he had with his two granddaughters Isla and Adeline Burns, and we can’t forget his granddog, Rocky.

Due to the current pandemic, the family will have a memorial service at a later date to celebrate Les’ life.

In lieu of flowers please donate in Les' name to North Attleboro Animal Shelter or a charity of your choice.