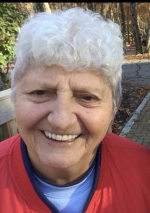 NORTH ATTLEBORO – Jeanette J. Watson, 83, of Holmes Road passed away Monday, March 2, 2020 at home surrounded by her devoted family.  She was the loving wife of the late Russell A. Watson, Sr. who passed away in 2012 after 57 years of marriage.

Born June 28, 1936 in Mansfield, she was a daughter of the late Antonio and Antonette (Cataloni) Fasulo.

Jeanette grew up in Mansfield and moved to North Attleboro after marrying Russell in 1955.

She was a 1954 graduate of Mansfield High School.  Jeanette was very active at Mansfield High, she played softball, basketball and field hockey.  She was also a cheerleader, lead majorette and in the glee club.  And she acted in several class plays.

She loved travelling, particularly on cruise ships and loved fishing and the beach, particularly camping at Nauset Beach and Race Point Beach in Provincetown.  Jeanette also loved spending time with her family, especially her grandchildren.

To sign an online guestbook for Jeanette, please visit www.sperry-mchoul.com.