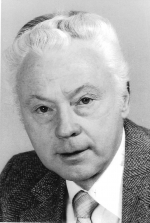 George E. Wood, of Plainville, MA (formerly of Seekonk, MA) passed away on February 14, 2020 after a short illness.

Born in Providence, RI on September 13, 1928 he was the son of the late Cyril R. Wood and Barbara (Earle) Wood and the brother of the late Robert, Kenneth and Raymond Wood.  He spent his childhood in Seekonk and East Providence and was a graduate of the Class of 1946 of East Providence High School.

He was an Army veteran of the Korean War and served in the Ordnance Corp prior to his discharge.

George spent his entire professional career at the Providence Journal Company starting as an electrician, gained his Master Electricians’ license, and served as Superintendent of the electrical department.  He was promoted to Assistant Director of Operations where he proudly oversaw the design and construction of the current newspaper production facility.  He retired from the company in 1993.

George was a true renaissance man who could build and fix anything.  At various times he dabbled in photography (including photo processing), gunsmithing, and furniture making.  He was proud to claim that he built his own house and boat.  He spent many happy hours fishing from a dock, on his canoe in Rehoboth, or on his power boat on Narragansett Bay.

He was an avid golfer and a talented woodcarver of birds and won several awards for his work; his birds were highly coveted by friends and family.

He is survived by his six children: Patricia E. Callaghan (William) of Plainville, David G. Wood of Pawtucket, Susan A. Beaulieu (Michael) of Attleboro, Thomas P. Wood (Jo-Ann) of North Dighton, Kathleen A. Lynch (Thomas) of Franklin and James F. Wood (Brenda) of Coventry, 17 grandchildren and 15 great grandchildren.  He was the Great Grandfather of the late Jackson T. J. Callaghan.

A wake will be held from 4 pm to 7 pm on Tuesday, February 18, at the Sperry & McHoul Funeral Home 15 Grove Street, North Attleboro, MA.  A secular service with military honors will be held on Wednesday, February 19, at 11:00 am in the chapel at the Gates of Heaven Cemetery in East Providence, RI.

In lieu of flowers, memorial donations in George’s memory may be made to a charity of your choice.