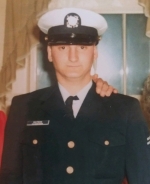 Born August 24, 1960 in Attleboro, he was a son of Jeanette (Fasulo) Watson of North Attleboro and the late Russell A. Watson, Sr.

He worked at Metal Craft in North Attleboro and with his dad and brothers at Rusty’s Marine in Coventry, RI for many years.

He was a U.S. Coast Guard Veteran.

Allan was a generous man and donated to many churches and charities throughout his life.  He also loved to travel.

In addition to his mother, he is survived by two brothers, Russell A. Watson, Jr. and wife Margaret of Coventry, RI and Edward Watson and wife Deborah of Albion, ME;

Also many nieces, nephews and grand nieces and nephews.

Visiting hours will be held on Wednesday, February 12 from 5-7 p.m. at Sperry & McHoul Funeral Home, 15 Grove Street, North Attleboro.  A funeral service will be held at the conclusion of visitation at 7 p.m.

In lieu of flowers, donations may be made to St. Jude’s Children’s Research Hospital, 501 St. Jude Place, Memphis, TN 38105.