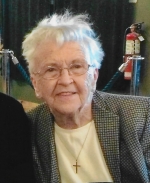 NORTH ATTLEBORO – Oriette E. Alix, 92, of Grove Street passed away Sunday, January 26, 2020 at Sturdy Memorial Hospital surrounded by her devoted family.  She was the wife of the late Richard Alix for 49 years before his death in 1998.

Born September 23, 1927 in Batiscan, Quebec, Canada, she was a daughter of the late Donat and Julie (Turcotte) Marchand.

Oriette grew up and went to high school in Canada and moved to North Attleboro after marrying Richard in 1949.

She was a homemaker, raising her children and later worked in customer service at Univis Frame for over 25 years before retiring at age 65.

She was an avid bowler and involved in several leagues at North Bowl over her life and bowled as recently as last spring.

She loved the Red Sox and watched every game.  She also loved the beach, particularly spending time at her camper at East Matunuck Beach in South Kingstown, RI.

Oriette was a longtime communicant of Sacred Heart Church in North Attleboro where she was an active member of St. Anne’s Sodality.  She also loved her family and was active in supporting all her children’s activities.

And a sister, Marielle Beaumier of Fabreville, Quebec.

She was mother of the late Joanne M. Hagerty and mother-in-law of the late Patricia Daly.

Visiting hour will be held on Wednesday, January 29, from 5-7 p.m. at Sperry & McHoul Funeral Home, 15 Grove Street, North Attleboro.  A funeral will be held from the funeral home on Thursday, January 30 at 10 a.m. followed by a Mass of Christian Burial at Sacred Heart Church, 58 Church Street, North Attleboro at 11 a.m.  Burial to follow at St. Mary’s Cemetery, Attleboro Falls.