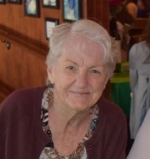 BUZZARD’S BAY – Mary L. Johndrow, 82, a longtime resident of Randolph passed away late Friday evening, December 13, 2019 at Toby Hospital.  She was the loving wife of the late Robert F. Johndrow, to whom she married March 13, 1957.

Born August 12, 1937 in Quincy, she was a daughter of the late Lawrence and Mary (Brown) Kelsey.

Mary and Bob raised their family in Randolph before retiring to Buzzard’s Bay.

After the children were raised, Mary went back to school and earned an Associate’s Degree from Massasoit College in 1989.  She continued her education from Bridgewater State College where she earned a Bachelor’s degree in 2000 at age 63.

Mary grew up in the Hough’s Neck neighborhood of Quincy and was a 1955 graduate of Quincy High School.  She enjoyed many summers on the family farm in Damiscotta, ME.

She was an avid bowler and loved playing bingo, painting, search puzzles and walks along the Cape Cod Canal.  She was also a baseball fan.

Visiting hours will be held on Thursday, December 19 from 5-8 p.m. at the Sperry & McHoul Funeral Home, 15 Grove Street, North Attleboro.

A funeral service will be held in the funeral home on Friday, December 20 at 10 a.m.