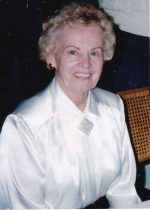 Born on September 22, 1917 in Boston, she was the daughter of the late Michael P. and Elizabeth M. (Acres) Lynch.

Dolores lived in the Mattapan section of Boston for 30 years and was a graduate of the High School of Practical Arts in Roxbury.  She attended Simmons College and then taught Dressmaking as part of the Adult Education program at schools in Stoughton for three years then twenty years in each Canton & Wellesley before retiring in 1970.

She is survived by a son, Daniel T. Costello of East Falmouth; a sister, Bernadette Hemingway of Carver; and 4 cherished grandchildren and 8 adored great-grandchildren.  She was mother of the late Patricia L. Bickerstaff and sister of the late Joseph Lynch, Mary McSweeney, George Lynch, James Lynch, Claire Simmons and Irene Lynch.

Visiting hours will be held on Thursday October 31, 2019 from 10-11am in the Sperry & McHoul Funeral Home 15 Grove St. North Attleboro.  A memorial service will follow at 11am.  Burial will be held privately at a later date.