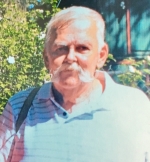 North Attleboro – Timothy F. “Tippy” Coyle, 77, of South Washington Street, passed away on Saturday, September 21, 2019 at his home surrounded by his family.  He was the loving husband of Cindy (O’Leary) Coyle to whom he’s been married to for 54 years.

Born in Attleboro on September 22, 1941, he was the son of the late John and Kathleen (Spillane) Coyle.

Tippy was an avid sports fan. His favorite team was the Boston Red Sox, but most of all he loved to spend time with his family and friends.

He was the father of the late James Coyle who passed away in 2011.

Visiting hours for Tippy will be held on Wednesday, September 25, 2019 in the Sperry McHoul Funeral Home, 15 Grove Street, North Attleboro from 4 to 7 p.m.

In lieu of flowers, donations in Tippy’s name may be made to the North Attleboro Park and Rec. Dept., 43 South Washington Street, North Attleboro, MA 02760.