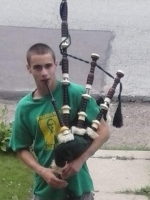 Born on September 13, 1997 in Kingman, Arizona he was the son of Todd and Danielle Walter.

He was a 2016 graduate of North Attleboro High School.

Joshua briefly served in the U.S. Army and planned to become a police officer and previously worked at Dairy Queen.

Joshua volunteered at Lenore’s Pantry, Christmas is for Kids Toy Drive and handed out toys in North Attleboro. Also participated in Earth Day Town clean up for several years.

He joined martial arts at 7 years old and was an excellent bagpiper.

Josh was a kind, loving, loyal person and would give the shirt off his back to anyone.  He was everybody’s rock. He loved life and was the life of the party. Never left a friend in need behind.

Visiting hours will be held on Friday September 6, 2019 in Sperry & McHoul Funeral Home 15 Grove St. North Attleboro, MA from 4-8pm with a service at 8.  Burial will be private at a later date.

In lieu of flowers, donations may be made to Wounded Warrior Project P.O. Box 758517

Family would like to thank Tara Langille for her kindness and everything she has done to help.  They would also like to thank the Town of North Attleboro for their humbling support.