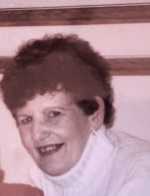 N. Attleboro, MA  Lenore (Quinn) Paquin 81, of N. Attleboro formerly of Naples FL, passed away peacefully in the loving arms of her sister and daughters.  Born on November 2, 1937, she was the daughter of the late Leonard J. and Margaret B. (Spillane) Quinn.  She was the loving wife of the late James E. Bound. She was predeceased by her daughter Julie Ann Paquin.  She is survived by her daughters Jill E.(Paquin) Curreri and her husband Joseph of Beverly; Leslie M. Paquin and her husband Joseph Fontneau of N. Attleboro; her grandson Robert James Paquin Curreri of Beverly; her sister Brenda Quinn; her nephew Leonard Dieterle of Franklin and niece Elizabeth Dieterle of N. Attleboro and many, many loving nieces, nephews and friends that she loved dearly. She was also the former wife of the late Robert H. Paquin.

Lenore gave twenty-seven years of service to the Town of North Attleboro as the Public Health Nurse. In addition to her role as Public Health Nurse, Ms. Paquin was especially well known for her many community and charitable works. She has been on the Board of Directors of the Visiting Nurses Association,Versa Care, New Hope, Attleboro Area Community Council and Hillside Adult Care, where she was also a founder. In 1999 Lenore was given a congressional tribute for her years of devoted services to many Massachusetts communities. She  has also  been honored by and organizations too numerous to mention.

It has been said that whenever there was a need, Lenore stepped in and offered her assistance. She organized kitchens where she distributed food to the families who were going without and arranged Thanksgiving and Christmas campaigns to alleviate the problems that families encounter during the holiday season.

Lenore was also the founder of Lenore’s Pantry which was humbly established in the late 70’s as a closet that Lenore used to fill with non perishable food items, many times from her own home, when she saw the need to help families that literally did not have money to buy groceries for their families. When a single Mom would come to her with not enough money to feed her children, Lenore would just let her go to closet and take whatever she needed.  Today it is a well established food pantry that was dedicated in her honor in 2003 after her retirement.

When you mention the name Lenore in the Town of North Attleboro and the surrounding area, it is not necessary to mention her last name because everyone knows her and her work. A number of years ago when the Attleboro Area Business and Professional Women honored her, she spoke about the difference in taking care of patients in a hospital setting and in her role as a Public Health Nurse. She stated--``In a hospital setting you never know what happens to them when they leave. Here you walk along with them. I kind of like that.” This is what made her so unique.

Lenore was a 1959 graduate of St. Joseph Hospital School of Nursing in Providence, RI.  Along with her 27 years as the N. Attleboro Town Nurse, she was the school nurse for the students at St Mary’s and later St. Mary/Sacred Heart School in N. Attleboro. She loved being amongst the children and always provided a safe haven for them.  After her retirement she became a nursing supervisor at Madonna Manor for many years.  It is there that she touched the lives of so many as they neared the end of their lives.  She also trained many nurses and aides in the fine nuances of compassionate nursing.

Lenore, ironically spent the last of days at Madonna Manor.  The family wishes to express their deepest gratitude to the entire staff at Madonna Manor for the love and care that was given to her.  Please continue her legacy, in providing compassion to those in such desperate need.