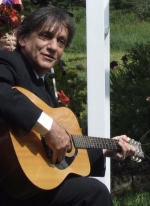 REHOBOTH – David A. Richard, 60, of Providence St. passed away on Tuesday July 30, 2019 at Tufts Medical Center in Boston.  He was the loving husband of Krista (Peters) Richard.

Born on April 30, 1959 in Attleboro he was the son of Armand and Yvette (Messier) Richard.

David lived in Rehoboth for 8 years and worked at Nationwide Foam in Framingham for 11 years.

He loved football, Nascar, playing guitar, boating and the Gulf of Mexico, but most of all he loved his family.