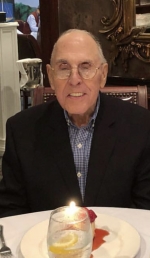 NORTON – Mario A. Roque, 95, of Norton and a longtime resident of North Attleboro passed away Saturday, June 29, 2019 at Wingate Nursing Home surrounded by his loving family.  He was the beloved husband of Ida (Maciel) Roque to whom he married October 2, 1948 at St. Mary’s Parish in South Dartmouth.

Born October 2, 1923 in New Bedford, he was the son of the late Antonio and Maria Roque.

Mario grew up in Dartmouth and lived in North Attleboro for over 40 years and then Ft. Lauderdale, FL for 20 years before moving to Norton in 2010.

He was a 1941 graduate of Dartmouth High School and attended Bryant College in Providence, RI before his studies were interrupted by World War II.

He was a Staff Sergeant for the U.S. Army, medical division, during the war and served in European Theatre.  After the war he returned to his studies at Bryant and earned a degree in accounting.

Mario worked as an accountant at V.H. Blackinton Company for many years before buying the business with a team of investors in 1974.

He adored his wife and enjoyed spending time with his family.  He also loved ballroom dancing and music.

In addition to his wife, he is survived by two sons: Stephen Roque of Norton and Peter and wife Michelle of Mansfield; two grandchildren: Andrew and wife Mollie and Matthew Roque; and two great-grandchildren Hunter and Eliza.

Visiting hours will be held on Wednesday, July 3 from 8:30 a.m. to 9:30 a.m. at the Sperry & McHoul Funeral home, 15 Grove Street, North Attleboro.  A funeral Mass will be celebrated after visitation at St. Mark’s Church, 105 Stanley Street, Attleboro Falls at 10 o’clock a.m.  Burial will follow at St. Mary’s Cemetery, Attleboro Falls.

In lieu of flowers, donations may be made to the Wounded Warrior Project, PO BOX 758517, Topeka, KS 66675-8517 or at www.woundedwarriorproject.org.