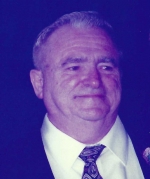 North Attleboro – Lawrence W. Hughes, 87, of South Washington St. passed away on Tuesday, June 18, 2019 at Garden Place Healthcare in Attleboro surrounded by his loving family.  He was the beloved husband of Mildred F. (Hurley) Hughes.

Lawrence was a 1951 graduate of Woonsocket Sr. High School.  After graduation, he joined the United States Army and served for 4 years.  Following his discharge, he worked as a weaver for several companies and retired from H & H Screw in Rhode Island after many years.  Once retired, he enjoyed his employment at Walmart Super Store in North Attleboro as a greeter for 10 years.

He loved reading, music, gardening, and sports, but most of all he enjoyed spending time with his family and his pets.

In addition to his wife, Mildred, Lawrence is survived by his two stepdaughters:  Lisa D. Gardner and her husband Albert of North Attleboro, and Suzanne M. Church of Mansfield; his sister:  Pearl C Priestly of Rhode Island and several nieces and nephews.