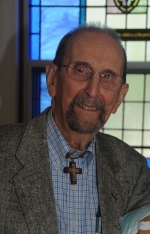 NORTH ATTLEBORO – Bernard “Bernard of the Cross O.C.D.S.” Poirier, 90, of North Attleboro passed away, June 6, 2019 at Sturdy Memorial Hospital.  He was the devoted husband of Rolande (Daneau) Poirier for 71 years.

Born August 30, 1928 in Taunton, he was a son of the late Alexander J. and Elizabeth (Frechette) Poirier.

Bernard grew up in Taunton and has been a resident of North Attleboro since 1961.  He worked as a self-employed contractor at Poirier & Daneau Construction Company in Pawtucket, RI.

Bernard was a devoted communicant of Sacred Heart Parish in North Attleboro and was active in many church activities including choir and as a lector.  He was a member of C.F.M. (Christian Family Movement) and was a member of the Secular Order of Discalced Carmelites. Bernard was a private pilot and travelled with his wife Rolande around the country for several years.

He was the brother of the late Norman Poirier, Janet Nerbonne, and Dolores LaCroix.

Visiting hours will be held on Monday June 10, 2019 from 5-9pm in the Sperry & McHoul Funeral Home 15 Grove St. North Attleboro.  A funeral will begin from the funeral home on Tuesday June 11, 2019 at 9am followed by a  Mass of Christian Burial at 10am in Sacred Heart Church 58 Church St. North Attleboro, MA.  Burial to follow in Notre Dame Cemetery, 359 Daggett Ave. Pawtucket, RI.