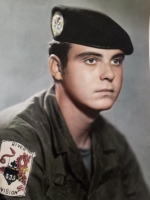 NORTH ATTLEBORO  -  Christopher Blake, 70, of Taylor St., died Sunday May 12, at the  Philip Hulitar Hospice Center in Providence. Chris was the son of the late James and Eva Lacasse Blake.

He attended North Attleboro schools and worked in local factories and the Rome Restaurant prior to service with the U.S Navy. His most fond memory of employment was part-time while in school delivering (for those old enough to remember) Cushman Bakery products door to door with a neighbor.

At seventeen he enlisted in the Navy with his best friend Richard Pinsonnault (www.vvmf.org) whose body he escorted home from Delaware. Chris was later sent to Vietnam where he served gallantly with Task Force 116 during Operation Slingshot, aboard a 4 man river boat called a PBR. He participated in 104 combat missions while in country.

Upon returning home and having worked shortly for Rudd Murray Systems, his life became complicated with PTSD and various conditions related to Agent Orange. He was misdiagnosed and was prescribed the wrong medication for 18 years. He also lost several other friends who also served in Vietnam. Even so, with all that, it did not leave him embittered in his relationships with friends, acquaintances and family to whom he was kind and caring. He was a member of the Veterans of Foreign Wars, and Gamewardens Association www.tf116.org   Although never married, he had a love for Lady Luck and all the treacheries, joys, frustrations and comradeship she introduced him to.

He is survived by his loving brother Kevin. His former sister-in-law and friend Mary Blake of Quincy, MA, his cousins, who were more thought of as sisters. Tracey Desilets, of Clearwater, FL, Jocelyn Lane of Woodbury, CT, her son Jeffrey and his family of Panama City, FL, Nikki and husband Ken of Waynesville, NC and daughters Erin and Heidi and their families also in NC, Lisa and husband Dave and sons Tanner, Noah, Garret, and Christian of Oakville, CT, Kelli and husband Paul and daughters Cailyn and Cassidy , of Woodbury, CT. and extended family, friends and acquaintances, especially the large Ouimet clan, the Degaitas family, Dale and Dana Gaudette, the Kelliher family at Christmas, G P Chabot,  his mom Patty, and brother Marine Sergeant Major Mark R Chabot, Steve Hinski, Sue and Kathy, Shirley, the Lady Luck club, Craig, Bobby, Joe F. and Laura from the bank. To those I forgot or did not know Chris will remember you all. Thanks!

I thank all for their thoughts and prayers, visits and loving support for me and my brother at home and in Providence, and his team of caregivers at the VA Hospital in Providence, the team at Hope Health Hospice, especially, Linda his visiting nurse at home and all the staff at Philip Hulitar in Providence for a dignified and loving transition. God richly bless you all.
Services will be omitted according to his wishes and interment of ashes will be held at a later date at Bourne Mass National Cemetery. For more info contact Kevin, This email address is being protected from spambots. You need JavaScript enabled to view it.
Memorial donations if desired may be made to Lenore’s Pantry, North Attleboro Board of Health Office, 43 South Washington St., North Attleboro 02760.
back to top