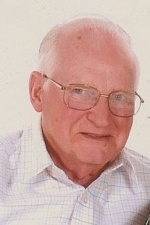 NORTH ATTLEBORO – Raymond A. Plante, 95, of North Attleboro and Lady Lake, Florida, previously of Plainville, passed away Monday, April 22, 2019 at Philip Hulitar Hospice House surrounded by his devoted family after a courageous battle with cancer.  He was the loving husband of Barbara Meyer-Plante and the late Dorothy (Chatham) Plante and Ruth (Beaupre) Plante.

Ray was raised in Bishop Bend, in Pawtucket RI.  He attended Tolman High School in Pawtucket and worked for 47 years as an engineer for Fram Corp, now a division of Honeywell and was very proud of his growth within the company.   Ray was a self-taught man and could fix anything and loved to help others.

He entered the Navy in 1942 and served 5 years as a radar man and coxswain on a landing craft during World War II.

Ray was a communicant of St. Mary’s Church in North Attleboro. He volunteered at the Plainville Public School’s enrichment program teaching the students cribbage.  Ray loved to travel and enjoyed many cruises and trips to the west coast and Canada to visit family.  He and Barbara traveled to Italy and he especially enjoyed their trip to New Zealand in 2012 when he was honored at the 70th Salute for WWII veterans.  Ray was an avid golfer and enjoyed spending time at his home in Florida, his walks with his dog Maya, but most of all, he enjoyed time spent with family and friends.

In addition to his wife, he is survived by his four children: Geneive  Garwasiuk and husband Ronald of Canada, Stephen Plante and wife Ines of California, Nancy Plante of California and Terry Simpson and Tom Iarossi of Rhode Island; his grandchildren: Alison (Ryan), Wesley (Jessica), Adam and Laura (Matt) Garwasiuk, Kelby Ward (Mike), Dylan Plante and Seneca Lacombe (Sadie); and 6 great-grandchildren; his stepchildren:  Beth Oliviera and husband Jon of Raynham, Mark Fenton and wife Judy of Wrentham and Robert Fenton of Arizona;  Lori Erickson and Brett Langille of Plainville: Scott Meyer and wife Dawn of Bourne: and Ronald Meyer and wife Wendy of North Attleboro; 14 step-grandchildren and 10 step-great-grandchildren, his beloved dog Maya, and many nieces and nephews and cousins.

Ray was predeceased by his sister Estelle Gruslin and his uncle-brother Raymond Cusson.

Visiting hours for Ray will be held on Sunday, April 28, 2019 from 2 to 5 pm in the Sperry McHoul Funeral Home, 15 Grove Street, North Attleboro.

A Mass of Christian Burial will be held on Monday, April 29, 2019 at St. Mary’s Church, 14 Park Street, North Attleboro at 10 a.m.  A Burial with veteran’s honors will follow at Notre Dame Cemetery, Pawtucket, RI.