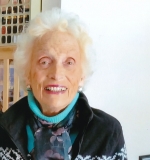 Sheila (Maloney) Hoye, 83, of North Attleboro passed away peacefully at Sturdy Memorial Hospital in Attleboro on Wednesday May 1, 2019.  She was the beloved wife of Vincent J. Hoye, to whom she was wed for 58 years.

She was born on October 3, 1935 in Attleboro, MA. She was the loving daughter of the late Roland V. and Gertrude (Cullen) Maloney.

Sheila grew up in the Falls section of North Attleboro and was a 1953 graduate of North Attleboro HS.  She attended and graduated from Stonehill College where she met the love of her life and future husband Vin.  The couples first date was the Herring Run at the Taunton Inn.  They married in 1960.

She began her teaching career as a French teacher in N.A. school system, and later was an enthusiastic teacher and taskmaster in grade 4 at Martin School.  Sheila was affectionately known by generations of Martin School children as “Hurricane Hoye”.  She relished her work as a teacher for over 30 years, retiring in 1999 with countless friends from both colleagues and student ranks.  Sheila always could be seen conversing with former students and parents at athletic fields, town hall, the library, Stop and Shop, the landfill, and throughout her daily travels around town.  She never failed to send kind notes of thanks or encouragement to all her many friends, family, and former students.

Sheila was a staunch Democrat and a proud member of the NA Democratic Town Committee.  She was a longtime RTM member, always voting to do what was the best for the townspeople of NA.  Sheila exuded love and appreciation for all.  She was especially proud of all her grandchildren competing on the fields and in the classroom at North Attleboro High School.

She enjoyed feeding the Cardinals, Goldfinches, and even the occasional squirrel.  The final 27 years of her life was spent on Old Post Road where she could often be seen walking the neighborhood and picking up litter to keep her piece of NA clean.  She was a working member of the Keeping North Attleboro Beautiful Society.

In lieu of flowers, expressions of sympathy in Sheila’s name may be made to Keep North Attleboro Beautiful 500 East Washington St. #62 North Attleboro, MA 02760.

To sign an online guestbook for Sheila please visit www.sperry-mchoul.com.