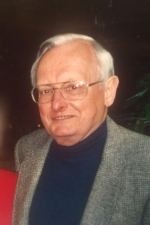 NORTH ATTLEBORO - Raymond A. Beaulieu died peacefully in the care of Hope Hospice at Sturdy Memorial Hospital in Attleboro on April 14th, 2019. He was the loving husband of June (Wood) Beaulieu for over 63 years.

Born June 9, 1934 in Attleboro, he was the son of the late Albion and Mary (McGinn) Beaulieu.

Ray was a lifelong resident of North Attleboro, and an avid woodsman. He spent many days of his youth hiking, fishing and camping in the area's woodlands, and knew the forests and footpaths around Mt. Hope Street like the back of his hand. Ray shared that love of the outdoors with another generation later on, as a Scoutmaster for Troop 23 in Attleboro Falls.

He is survived by his loving wife June and devoted son Douglas. His three grandchildren, Derek, Jason, and Austin Beaulieu were his pride and joy. He loved being their “Umpa”.

He will also be greatly missed by his feline sidekick, Jasmine.

His love of the outdoors was life-long, and after retirement he enjoyed nothing more than spending a day in the yard, stacking firewood and keeping the bird-feeders full for the flock of turkeys that often stopped by. He also spent much beloved time with June at their “Sanctuary” on Mousam Lake in Maine, fishing, reading, and relaxing with friends.

Ray served in the US Army, at Fort Devens in Massachusetts, shortly after the Korean War. Assigned to a hospital unit, he drove an Army ambulance daily between Boston and Ft. Devens.

Ray was a solid fixture in the area’s jewelry industry for decades, having worked as Vice-President of Manufacturing for VH Blackinton & Co. in North Attleboro, and The Robbins Company in Attleboro. He was rarely in his office, preferring to walk the production floors of presses and craftspeople whenever he could. Ray was also a North Attleboro RTM and Personnel Board member for many years and was instrumental in creating the Town’s Coordinating Committee.

A service will be held in the funeral home immediately following visiting at noon.  Burial will be held privately at a later date.

Ray’s wife and son would like to thank the staff at Sturdy Hospital for their compassionate care, as well as Ray’s great friends Daniel and Lori DeYoung for their love and support. In lieu of flowers, a donation may be made to the Friends of North Attleboro Animal Shelter, 43 South Washington Street, North Attleboro, MA 02760.