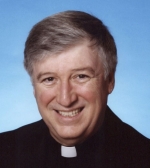 Rev. Dennis J. Loomis, M.S., 70, a Missionary of Our Lady of La Salette, died on Sunday, March 31, 2019 at St. Mary Home in West Hartford, Connecticut.  Father Loomis was the son of the late Donald and Antoinette (Pepin) Loomis and was raised in Easthampton, Massachusetts.  He entered the Novitiate of the La Salette Missionaries in 1970 in Attleboro, MA.  He completed studies at the La Salette Seminary in Enfield, New Hampshire; Assumption College in Worcester, MA; and the Theological Divinity School in Cambridge, MA.  He made his first Profession of Vows in 1971; his Perpetual Profession in 1976; and was ordained to the Priesthood in 1977.

Father Loomis has served the Church and his Congregation in a variety of capacities:  Director of Novices; Director of Vocations; Co-Pastor of Holy Rosary Parish in Windsor, Ontario; Superior of the La Salette Shrine in Enfield, New Hampshire; and worked on numerous commissions and committees.  From 1988-1994, he served as the National Director of the Emmaus Spirituality Program for Priests.  In 1997, he was elected Provincial Superior of the Immaculate Heart of Mary Province and in 2000, when the four American Provinces merged, he was elected Provincial Superior of the new Province of Mary Mother of the Americas.  In 2006, he was elected Superior General of the Congregation of the Missionaries of La Salette and served in Rome with his council.   Upon his return to the United States in 2012, he ministered at the La Salette Shrine in Attleboro and surrounding parishes.  As his health declined, he moved to Hartford House in Connecticut prior to his move to St. Mary Home in West Hartford, Connecticut.

Father Dennis was well known for his gifts and talents which included his enthusiasm, knowledge and willingness to serve whatever ministry he was asked to do; his unique talent for leadership, sense of humor and generosity.  All of these qualities made him much loved and respected by all who knew him.

In addition to his La Salette confreres, he is survived by his sister, Patricia White and her husband Stephen; his sister-in-law, Kathleen Loomis Babinski; as well as three nieces, Rebecca Signet, Andrea Page, Lindsey Varone and two nephews, Brian White and Keith White.  He was pre-deceased by his brother, Donald Loomis, Jr.

Calling hours will be held on Thursday, April 4, 2019, at the La Salette Shrine Church in Attleboro, MA, from 7:00 to 9:00 pm, a prayer service will be begin at 7:30 pm.  The Funeral Mass will be con-celebrated on Friday, April 5, 2019 at the Shrine at 10:30 am.  Burial services will be held at a later date in the La Salette Cemetery in Enfield, New Hampshire.  Contributions in Father’s memory may be made to: Missionaries of Our Lady of La Salette Retirement Fund, 915 Maple Avenue, Hartford, CT 06114-2330.